I’ll get this out of the way immediately: there was nothing spiritually enlightening nor spectacular about my challenge today… except, maybe, for the fact that it was nearly unsuccessful.

Though I’d recently given our 17-year-old senior pup a bath, it’d been quite a while since 7-year-old Lab mix, Milo, and 18-month-old herding dog, Eva, had enjoyed one. And since on hot days, Milo likes to lie in the shade beneath our motorhome in the dusty driveway, he’s been gravely in need of some spa time. Today it’s been in the upper 20’s Celsius (low 80’s Fahrenheit), so it seemed like the perfect opportunity to give them both a dousing.

To complicate things just slightly, Milo doesn’t particularly like water. Or, I should say, he’s not fond of the fluid when it’s flowing from a faucet. Nor if it’s splashing out of a shower head, or hammering from a hose. So, we must be a bit clever when bath time rolls around.

I gathered some props that I thought would make the job easier, arranging them on a cemented area in our backyard, near the water cistern: a bucket of mild soapy water, a tub of clean cool water, a large sponge and a Lab-sized towel. I slipped into my swimsuit and rubber flip flops and was ready to go! If I was going to get soaked, I might as well have fun doing it!

Seeing the flurry of activity, Milo clearly thought we were going to be taking a walk. So when I began calling him towards the rear of the house, he was perplexed. He sat near the gate, looking my way and wagging his tail, still hopeful. Hmm… this was going to be trickier than I thought.

Eva, on the other hand, was running circles around me, jumping up and down, as if to say, “What are we going to do? Huh? Huh? What are we going to do? Will it be fun? Will I like it? Huh? Huh?” I don’t know if I’m the only one with such a quirky imagination, but I often envision what my dogs might be saying to me (and in what sort of voice), if only they were able to express their thoughts.

I continued to beckon Milo to come, in as coaxing a tone as I could muster, but to no avail. Eva, however, was still beside me and a willing candidate, so I decided to bathe her first. When she realized what was going to happen, she attempted an escape, but then quickly resigned herself, trusting and mostly obedient soul that she is. She was clean and somewhat dried off in no time, and I turned my thoughts back to Milo.

I decided that fetching his harness and leash would probably be the most effective solution. And sure enough, the mere tinging sound of the big “leash can” being pulled from the cupboard and opened had the two younger pups leaping for joy around me. I tried to explain that we weren’t going for a walk, but I fear my attempts were lost on ears that had perceived a singular word. WALK.

Applying Milo’s harness and attaching the leash was easy, but he was again confused when upon exiting the house, I headed towards the yard rather than the front gate. Still he followed expectantly and even sat obediently and allowed me to take a pre-bath selfie with him.

Then the sponging commenced. And he actually realized pretty quickly that a cool bath on a hot day equals pleasure. He stood there, closing his eyes and savoring the refreshment, as I washed his back and belly, four legs, paws and tail, head and chest. I was even able to remove the leash and harness, with no attempt to flee on his part.

Once washed and rinsed, I dried him lovingly with the big towel, while he basked in the enjoyment of all this attention.

In every thing give thanks: for this is the will of God in Christ Jesus concerning you.
1 Thessalonians 5:18 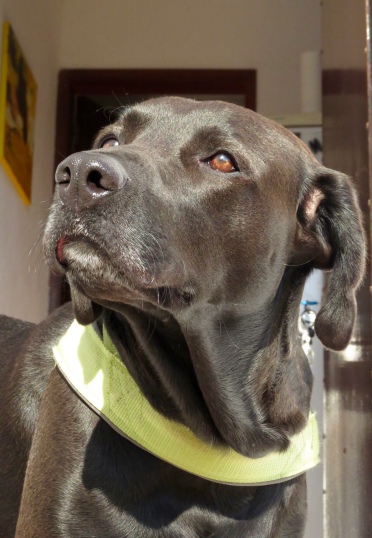